Paul: Hello folks. Paul and Cari here once again with another video review for you.

This one is not a tobacco review as this is not a tobacco product at all. It’s not an herbal product either. This is Shisha Fruits Vapor Fruits Raspberry. This is as you saw in the packing video, it’s raspberry mash. It is pulp made from raspberries that is then flavored with raspberry flavoring and glycerin. It’s weird but it’s good.

The smoke is good obviously.

Cari:  I’ve smoked two of these now, the strawberry and the raspberry and they’re both bordering on the edge between natural and artificial.

Paul: There’s absolutely no mouth feel to this because there’s no honey and no molasses. All you have is dehydrated fruit flavoring and glycerin. That’s it. That’s all this is. To be frank, this is like a giant vaporizer. It’s a giant e-cig. The coals are your coils and it’s pretty much e-liquid at this point.

Paul: And no nicotine either for those of you who are concerned about nicotine consumption.

Cari:  It’s just fruit that’s flavored and glycerin. It’s very interesting. I’m interested to try the other flavors that they have because they’ve done a good job so far.

Paul: The only concerns that I have with it are I’m not super sure about the effects of vaporizing dried fruit. I know that I really shouldn’t cast too many stones considering the fact that I am a big fan of tobacco, especially classic tobacco, that often has dried fruit in it.

It’s one of those things where if you want solid studies regarding the effects of hookah smoking, this is a new frontier and it’s not one where we have a lot of research. The other consideration is the fact that this stuff is so much sugar from the dried fruit and so much plant sugars from the glycerin that it burns and overheats pretty easily.

It’s also super wet so it bubbles up a whole bunch. Actually for a small portion of this session, I over-packed this micro-funnel, which I don’t know if you can see in the frame, but there’s juice all the way down here. This has turned brown at this point and burnt pretty badly earlier, but I recovered it and the flavor is still good, which is nice.

It shows that the flavor is resilient but you’re going to want to pack this lower than you normally would a tobacco because it boils so much. I got to say I think this is actually a product that I’m going to give a thumbs up to so far. I like it. It’s interesting. 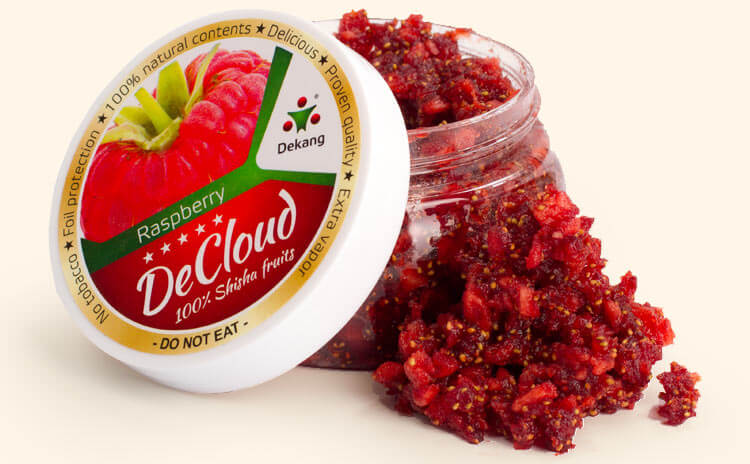 Cari:  It’s really interesting and it’s good in terms of flavor. It’s not a poor attempt by any means so I think I have to agree with you there.

Paul: My only real complaint regarding the smoking experience is the lack of mouth feel. It’s just that the smoke feels very airy and very lacking in texture, which is to be assumed from simply fruit pulp and a little bit of flavoring and glycerin.

Cari:  I don’t have as much of a problem with that.

Paul: Everyone’s got their taste, and Cari and I definitely have different tastes.

That’s about it. This is Paul and Cari saying thank you very much for joining us. Please go down below, like and subscribe. Give us that thumbs up, it really helps us out. Let us know what you think of this product and let us know if you’d like to see more reviews in the future as I have a lot of flavors to review courtesy of DeCloud.

Thank you very much for joining us and happy smoking. See you guys next time.