Get More Smoke Out of a Hookah 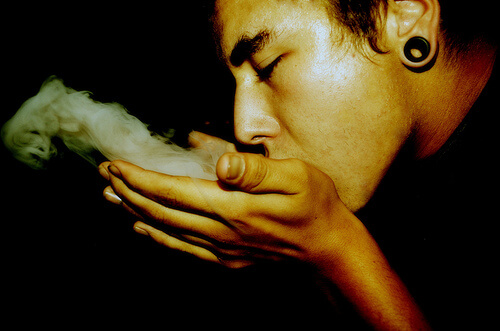 The hookah tobacco is the most important factor in determining the amount of smoke. Modern styles of hookah tobacco that utilize glycerin in their blends produce large amounts of smoke more easily that classic styles of tobacco. This is not to mistake that the tobacco alone can produce great smoke. The hookah still needs to be prepared correctly. 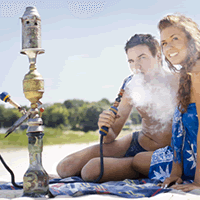 The way the hookah itself is shaped and made can play a key role in the amount of smoke.

Vase: A large hookah vase allows more room between the hose port and the water which prevents the water from getting sucked up into the hose. The shape of the vase doesn’t really change the smoke at all.

Stem: A wider inner diameter stem allows for an easier draw. A taller hookah makes for a harder draw. Finding a balance between the two is essential for a good session. Some people like a tighter draw and some like to feel no resistance. It’s a matter of preference. The only real concern is if a hookah is too short the smoke won’t have time to cool completely and you may get a warmer smoke.

Hose: A long hose has the same effect as a long stem as it would require more energy to get the same amount of smoke. A wider inner diameter makes the draw easier much like the stem as well. Again, it’s a matter of preference.

Also make sure there is not too much water in the base. The air space left in the base (the space not filled with water) is the space that allows the cool smoke to store which is what you smoke at every puff. So filling the base with too much water can result in water getting caught in the hose and if your hose is not washable then it can be ruined.

Bowl: Different bowls have different properties as well. Some are made from different materials that have varying heat retaining and distribution properties that will change how you have to pack your bowl and manage your charcoal. There are different style of bowls as well including classic Egyptian bowls and funnels. Each bowl requires a different packing technique and some are better for different kinds of tobacco than others. Funnel style bowls are known for having an easier draw and being better for wetter tobaccos.

It is essential to pack the tobacco correctly in the bowl and it varies from bowl to bowl and between kinds of tobacco. Most tobacco should not be packed hard. In other words don’t push the tobacco or over pack it when preparing the bowl. In an Egyptian style bowl, dense packing will not allow good air flow into the tobacco and therefore it will not allow all the tobacco cook evenly or completely.

In general it’s a good rule of thumb to sprinkle the tobacco in the bowl to leave enough room for good air flow.

Type of foil: Heavy duty foil is better than regular foil because it helps regulate the heat and avoid burning the tobacco. Some people use regular foil and use two layers. Two layers of HD foil is rarely needed and will restrict the heat too much to let the tobacco heat up properly.

Both the number of holes and size of them can affect the amount of smoke coming out of a hookah.

How many holes is the right number? That depends a lot on the size of bowl that you are using. Smaller bowls would need fewer holes. But as a rule of thumb one hold in the center and 3 or 4 concentric circles of close together hole is good.

Size of holes: Many people like holes the size of a toothpick or a thumb tack.

Assuming you are putting the holes on the aluminum foil after putting it on the bowl as supposed to using pre-made hookah foil with holes already in them:

When poking the holes push your toothpick (or whatever you are using) all the way so that it creates a pathway in the tobacco.