I can’t believe I have never made a post about this quintessential black moassel. Well, it’s time.

Just to make this clear, when I refer to “Nakhla black moassel” I am usually talking about mixes that consist entirely of tobacco and moalasses and no additional flavoring. Some people will refer to anything that has unwashed tobacco that lends a strong flavor to the final taste of the product as a black moassel. This is not entirely inaccurate, but it’s not quite right and I just wanted to clarify this point. Something like Desi murli plain is a strong and traditional style, Indian Moassel, but it is not a black moassel. 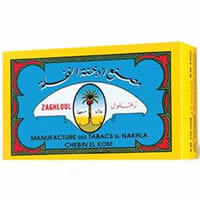 Zaghloul is one of the most simple examples of black moassel that you are going to find. It’s just fermented tobacco leaves and dark molasses. It’s a relatively young representative of the style, having first appeared in the mid 1900’s, but it is what most western smokers associate with traditional hookah tobacco. This is simply because it was only recently that demand for more traditional and robust products encouraged vendors to seek out other traditional tobaccos like Kass, Bata ans Egyptian juraks.

The flavor profile is pretty simple. It’s dark, earthy and sour with some rich notes similar to dark, dried fruit. There are some relatively strong smokey and woody flavors that will bring up memories of BBQ parties and bonfires, but these flavors are not aggressively strong. There are some similarities between the flavor of this Nakhla flavor and that of a heavily fermented maduro cigar wrapper.

This is definitely not going to appeal to everyone. If you are a cigar smoker and are interested in dipping your toes into the world of “real” hookah tobacco, this is a good start. It’s not overly complex or too strongly flavored so it should be a good starting point. Even if you are not a pipe or cigar smoker, this might be a good thing to try to see what an older form of hookah smoking is all about.

A few final notes before a rating. Zag should be wet and sticky. It should not be dripping wet like a modern style moassel and it should not be as hard as a hockey puck. If it is dried out then contact the vendor you got it from because it’s been sitting on the shelf for much too long. You should smoke Zag in the same way that you smoke most other hookah tobacco; with indirect heat and with foil or a screen. Smoking hookah tobacco with the charcoal directly on the tobacco should only be utilized for tombak. It’s not the more traditional or authentic way to smoke Zag. It’s the traditional way to ruin a bowl of Zag.

6 out of 10. Zag is a great and solid tobacco with a nice richness that I can happily appreciate even after smoking much more complex black tobaccos. It’s a good starting point for new members of the black leaf brotherhood and I suggest snagging a little and trying it out for yourself.