How to Acclimate Tangiers Shisha Tobacco

Today, I’m going to get into the what, why, and how of acclimating Tangiers tobacco.

What is Tobacco Acclimation?

Merriam-Webster defines acclimation as a physiological adjustment by an organism to environmental change. In this case, the tobacco needs to adjust (or acclimate) to the environment in which it is in. When opening a bag of Tangiers for the first time, you will, more than likely, notice a rather unpleasant odor. Usually the tobacco doesn’t smell like that wonderful-sounding “Other Breakfast Cereal,” but instead, it has an odor not unlike soy sauce, smoky barbecue sauce, or even a wet cigar. Tangiers is made in San Diego, California, so most buyers in similar climates (80 all day, every day, with low humidity) tend to need less, if any, time to acclimate their tobacco, because they may not even notice this odor. People in climates where the humidity varies quite significantly from day to day may have a harder time keeping their tobacco up to par, even from session to session.

In my personal experience, most times I will open my bag of Tangiers and it smells wonderful. But other times, it smells like someone dumped a bottle of Kikkoman inside the pouch. I can’t say, with any confidence, that your results will be consistent, especially if you purchase online and have the product shipped. Either way, you should acclimate your Tangiers tobacco every. single. time.

Why Should Tangiers be Acclimated?

And why every time? Why is it needed? If you haven’t guessed, acclimation makes that gross smell go away. Even if you don’t notice that distinct smell of soy sauce, I still recommend acclimating your tobacco. If your nose isn’t 100% on its game – whether it is because it is stuffed up, the weather’s off, allergies, etc. – you may not be able to detect the faintest of odors. And when that odor is still present, it will absolutely ruin your bowl of tobacco. Guaranteed.

Tangiers is made with a very different blend of molasses, flavorings, and tobacco than any other manufacturer on the market, and it is made with unwashed tobacco. Any shisha tobacco that’s made with unwashed tobacco can benefit from acclimation (though I’ve even heard of people acclimating Fantasia, believe it or not), though your Nakhla and Social Smoke should smoke just fine out of the package. The tobacco blend in Tangiers is very temperamental to changes in humidity than any other, and when it gets humidity shock, it emits that Soy/BBQ Sauce smell. By letting it acclimate, you’re basically letting the bad smells and the extra moisture that may be present to get out into the air, leaving your tobacco smelling glorious.

Now, for the part you’ve all been waiting for – how to acclimate your Tangiers! 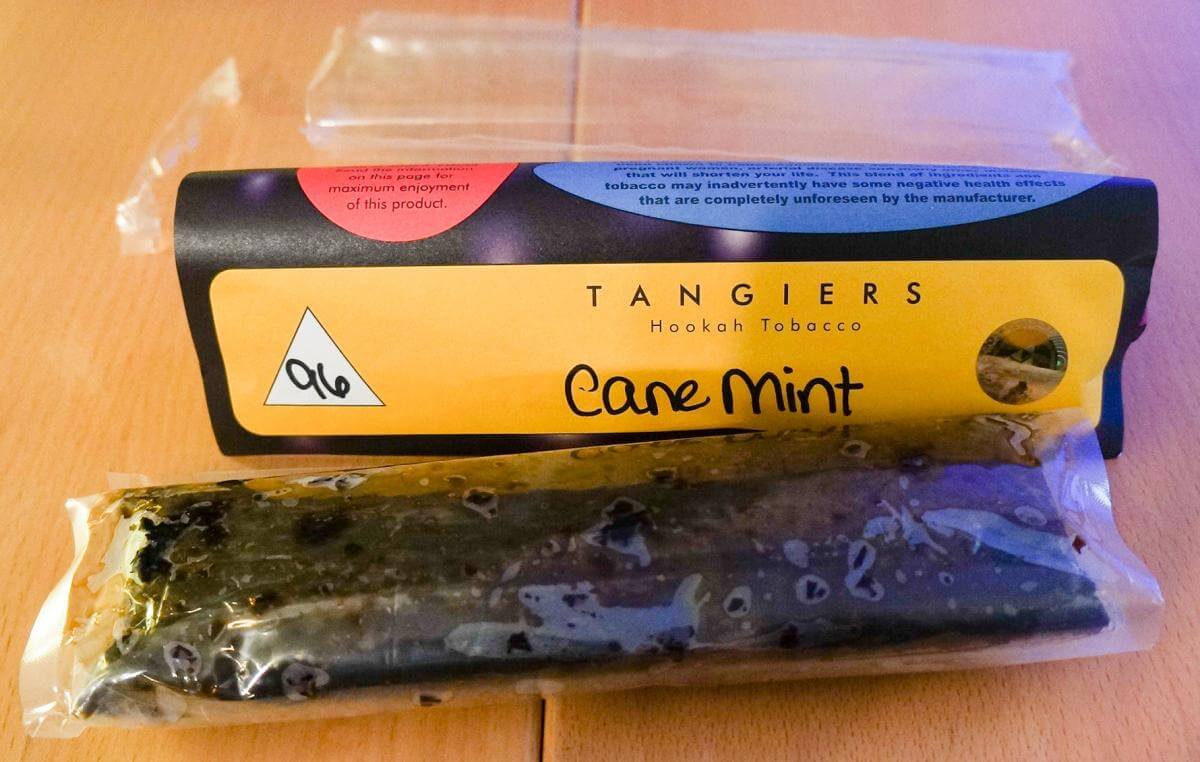 The sad thing about acclimating Tangiers is there is no single right way of doing it. The directions on the insert says to basically open the bag and leave it out until it’s fine. And while this may work, there are better techniques that trick the tobacco into acclimating faster. The following is how I typically acclimate Tangiers, but I would encourage anyone interested to visit YouTube and spend 15 minutes watching a few videos. You might find something else you like better. YMMV. For my technique, you’ll probably want a fork or an oyster fork. You can do this with fingers (as I have), but be prepared to wash your hands and dry them very well.

As one final note, be sure to acclimate where you will be smoking. Don’t acclimate your Tangiers at a buddy’s house and bring it home – you might find you need to acclimate it all over again.

That first part of the process is called the “instant acclimation” technique. I don’t think it’s really “instant” in all cases, but it can help significantly to “even out” the tobacco in the bag.

At this point, I determine when I want the tobacco. If I’m acclimating in the morning and I want it sooner rather than later, then I’ll do the following (Scenario A):

If I’m being lazy about the tobacco (which I usually am) or don’t need it for a while, I usually do the following instead (Scenario B):

When you’re done acclimating your Tangiers tobacco with either Scenario A or B, move the tobacco to a sealed container (it does not need to be air tight). I’d recommend using glass tupperware containers instead of plastic containers or bags so that the flavor doesn’t ghost the container. However, many people use plastic containers and are very content. I wouldn’t recommend bags, just because of the unique packing method of Tangiers. It can be done, but it will probably be more of a hassle than its worth.

Remember, you don’t have to do all or any of the steps I listed above. These are just what I do to get Tangiers acclimated a little faster. Any time the tobacco is exposed to outside air, it is acclimating. If you don’t want to do either scenario, or you don’t want to do the “instant acclimation,” you can skip them. The most basic technique is to just open up the baggie, throw it in the corner, and wait for it to smell nice, but know that could take significantly more time than using the steps above.

You have now acclimated your tobacco! It should be good to go forever and ever now and never need any more love because it is all rainbows and horsies and unicorns, right? … right?

The truth is, the climate in your home, even if you’re in a home with brand new, double-panned windows, can vary from minute to minute. The air temperature varies based on the outside temperature and how your air conditioners function, and with that comes changes in humidity. Anytime someone opens a door, humidity can leak in or be let out.

But fret not! You’ve already done the hard work. If the temperature has drastically changed, it’s gone from dry to monsoon, etc., leave your tobacco out for an hour or so before you smoke it. You’ll be good to go. Your climate hasn’t changed so drastically that none of your Tangiers is no longer good! But it’s changed enough that setting it out for an hour can make your session just a little better. And, don’t we all want that?

That’s it everything for this post. I hope you find that acclimation really isn’t a difficult process. The only hard part is just learning the way you wish to do it. Once you get the hang of the technique, it’s something you can just do without thinking about it.

The next post will be the third and final entry on this topic, where I will go into how to pack Tangiers in your bowl. Until next time, ciao.