Smoking Cigars With Your Hookah

Today (when I wrote this article) is the 4th of July and that means it’s time to remember those who fought for their right to make their own choice and mistakes and allow others to do the same. I have never been one to shy away from choices that were considered offbeat and weird. I decided it was as good a day as any to try something a little odd.

I stuck a cigar in my hookah and lit it on fire.

I figured, ‘what’s the worst that could happen? There isn’t that much of a difference between rolled tombak and a cigar when you really think about it.’ Tombak, for those who don’t know, is a natural tobacco product that is soaked in water and smoked through a hookah. The leaves are wrapped around the top of the stem and rolled into a cigar shape with coals placed on top and the smoke is similar to a light cigar. 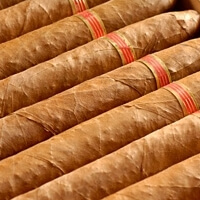 I chose a CAO America to run this experiment with. I cut the cigar, wedged it in the top of my hookah stem and wrapped a little electrical tape at the point of contact. The draw was ridiculously tight because the way a cigar is rolled is designed to allow much less air to pass through the bundle of leaves than would pass through a hookah bowl. Getting even a small amount of smoke was very difficult.

The little bit of smoke I was able to get, before I pulled the cigar off my rig in disgust, was super harsh and not very tasty. The flavors was similar to the cigar on its own, but a bit lighter. The harshness of the smoke solidified the idea in my mind that the water in a hookah does very little. It’s the hookah tobacco that deserves credit for the smooth smoke.

The long and the short, don’t do it. This was a bad idea and I’m glad I inflicted it upon myself rather than letting you wonder. Maybe next tie I’ll disassemble a cheap cigar and prepare it like tombak from soaking all the way to the charcoal. I’ll update if I do.