Why Is My Hookah Tobacco Red? 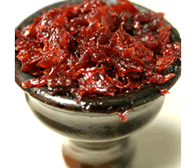 The beads of crimson ichor runs down your fingers as you look upon your grisly work. Once clean and pristine, the top of her neck is now a mass of sanguine shreds and your hands are stained like Lady Macbeth.

Hookah tobacco and red dye seem to go hand in hand. Whether it’s mint, strawberry, apple or almost any other flavor, it’s probably been dyed red by at least on company. But, why? It’s all marketing. Hookah tobacco is often seen as a candied confection in comparison to the rich and robust experience of natural tobacco and it is often assumed that those interested in hookah are looking for a smoking experience entirely removed from the tobacco plant. The dye was originally added to mask the color and look of natural hookah tobacco, which is just a pile of wet leaves. If you compare Fantasia to Desi Murli and present them to a new smoker based on appearance alone, Fantasia will probably come out on top most of the time because it looks like food and DM looks like dirt.

Speaking of food, there is a certain psychology to the coloring that is used. Red is seen as one of the most appealing colors for a human and it’s believed to be an instinct left over from our time of living in trees and eating almost entirely fruit and berries. Think about it this way; if you took a chicken breast and dyed it red you could still find it appealing. Now dye that same chicken blue, purple, green, brown or black and it’s instantly unappealing. This is why red is the most common and only rarely do you see some green creep in for flavors that are associated with that color in our minds; lime, mint and the occasional apple.

Happily, many companies are taking the dye out of their tobacco and treating hookah smokers like adults. Not only does it mean one less additive to worry about in regards to health, but it will reduce the chances of getting mistaken for a serial killer every time you pack a bowl.