Putting Wine In The Hookah’s Base 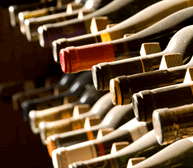 I have seen lots of people talking about putting wine in the base of their hookahs.  Many say it is a way to add flavor to the session and enhance certain flavors like Starbuzz Black Grape and other complimentary ones.  I have never been a supporter of liquid in the base other than water but I figured that I should give this one a try before I wrote it off entirely.

I have tried this with three different styles of wine at this point.  A Merlot, a zinfandel and a Japanese plum wine.  So far I am not impressed.

The Merlot first.  It was a relatively cheap and tasty bottle I bought for 7 bucks.  I don’t suggest using anything expensive for this practice. I mixed a small amount of wine into the water in the base.  About a glass worth.  I smoked it with a grape tobacco and later an apple to see if the contrasting flavors did anything different.  Not really much to be said here.  There was not much flavor added in the grape that I could definitvely say was not part of the grape flavor already.  That is why I tried it with the apple.  It was a much lighter flavor and I was able to pick out a little more from the wine.  It was slightly tannin like and not much else.  I could tell there was something different but if I did not know it was wine I’m not sure I would have been able to pick it out.

Next up is the white wine.  I learned my mistake, so to speak, and tried this one with very light flavors.  I used the same amount of wine and decided on the same apple flavor for the first try and then a strawberry.  Strawberry flavors are notoriously light.  This was pretty similar but was even lighter.  I got next to nothing with the apple and  picked up a little sweetness and a slight sour with the strawberry.  To be honest I think this may have been a little psychosomatic.  Meaning that I may have imagined the flavor change.

The plum wine was one that I was excited to try.  This particular plum wine is VERY aromatic and has a distinct scent that is unlike just about anything I could smoke.  I started this one with the strawberry and moved up to a peach.  The first attempt with the strawberry was pretty eventful.  I could pick out the subtle flavors of plum and a distinct oily note that was without doubt not part of the flavor.   This encouraged me to move up to the stronger flavors.  The peach hid the actual flavor of the wine but the oily note came through again.  It’s not something I dislike but it’s not complimentary to every flavor on the planet.  It was like sucking on the pit of the peach and tasting the essential oil.  But only lightly.

The conclusion of this experiment is this…  it’s not worth it.  Smoke a hookah and drink a glass of wine that compliments the flavor.  If you put the wine in the bottom it’s going to take the majority of a bottle to get a distinct and noticeable flavor and that is wasteful.  If you drink the wine you will experience all of the flavors of the wine, experience them in the way they were intended and have a much better experience.