This is a bit of an experiment that I ahve been wanting to run for a while. I finally got my hands on some Charcos charcoal and I wanted to see if it could be used for hookah. First, a little background. 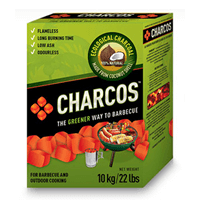 This brand of charcoal is designed for grilling but I was curious to see if it could be used for hookah as well. I contacted the company and discovered that they make a version of this charcoal for hookah but they don’t distribute it in the US. I was assured that the recipe was practically the same between the two lines and that the grilling charcoal would work fine for hookah and that it wouldn’t cause any health issues. So, I ordered 10 kilos of charcoal. That is a lot of charcoal, but I figured if it didn’t work for hookah I could still use it in my grill.

The coals themselves are very large. They are about three times the size of a Coconara flat. They are, understandably, about three times heavier as well. This makes sense considering that they are designed for grilling. You are going to want larger pieces of charcoal than you would with hookah. This had me worried about overheating my bowl so I decided to go with my Tangiers Small Funnel because it is so large.

I lit a good number of these coals in the traditional way, with a charcoal chimney. I also lit a Coconara on the pile of red hot charcoal and the Charcos took about three times as long to light. That’s not surprising in the least.

Taking a single Charcos and the one Coconara, I placed both pieces of charcoal on my bowl. I was very careful about balancing the Charcos on the edge of the bowl so as to not overheat my tobacco. Once the bowl fully warmed up I actually got decent clouds and didn’t experience any kind of charcoal flavor. I never got any headaches or other symptoms associated with bad charcoal and carbon monoxide poisoning.

The big problem is their durability. Once they are lit, these coals are very fragile. The first time I ashed the Charcos it broke into three pieces. Two of those three pieces shattered when I tried to move them a little later and became useless piles of charcoal dust. I’m glad that I smoke outside.

2 out of 10. The final conclusion is not a positive one. There was no flavor or toxic fumes coming off these coals, which I will be happy to use when grilling. But the fragility of the charcoal makes them pointless for hookah smoking. If you are really scrapped for money then I could see using these outside but never inside your home. The price would be amazing if these were better for hookah smoking, but they aren’t so don’t bother.