Charcoal is the spark of life in the world of hookah. Without heat we have no smoke and you’re just sucking air through a fancy pipe. These coals come in two major varieties: “Natural” and “Quick light“.

Let’s start off with one very basic pointer. Your charcoal needs to be fully lit before it goes anywhere near your bowl. Partially lit coals result in nasty flavors and harsh, toxic smoke smoke thanks to partial combustion and the release of the starter chemicals. Make sure the coals are fully lit and ashed over on all sides.

If you’re very industrious you can also make your own coals at home. Correct use of coals is a huge part of hookah heat management.  Here are few more useful articles:

What are the Best Hookah Coals?

This is really a matter of opinion. Quick light coals are usually lit within 20 seconds and are more convenient. However they often add unwanted flavors and chemicals to the tobacco while costing more money. Natural coals take longer to light up but they are much better for the session than quick light coals in that they don’t add flavor or smell and last longer. Natural coals are generally the top choice for those smoking at home or in a place where they have access to a fire or stove. Coconut charcoal has become the standard over other forms of natural coals as they are uniform, reliable and pack a lot of heat into a smaller package.

Time for a little more detail. 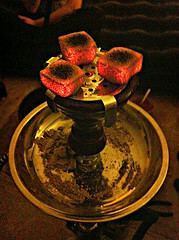 Natural hookah coals contain no additional chemicals and require a prolonged heat source to light. These can come in two major categories. “Natural lump” has not been reformed and still retains the shape of the original wood. Second is reformed charcoal which takes crushed charcoal and forms it into a standardized shape to make for a more consistent and controllable product. Reformed charcoal can be made from hardwood, bamboo or coconut shells.

I have omitted natural lump charcoal as there are too many brands to list and they are practically all the same.

Coco Mazaya is a coconut charcoal made by Coconara. Cheaper than the original Coconara coals and in a slightly different shape in the form of a cube. Considered to be of the same quality as the original line but some people like one shape over the other.

Another coconut coal considered to be of mid range quality. Cheaper than some higher end coals but there is debate as to the ratio of quality vs cost.

A cube shaped coconut coal that is produced by Coconara. The cheapest of the coconara produced charcoals. High quality for the price. Rumors that these are being discontinued have been circulating. Considered to have a very high quality compared to their relatively low cost.

A coconut coal that has been released by Ultimatehookah.com. Very affordable. High quality. A bit smaller than some other coconut coals but they produce good heat for their size.

A brand of coconut charcoal that has been released by Hookah-shisha.com. Out of stock as of the most recent update to this article.

A large, cube shaped coconut charcoal widely used in Europe. About twice as large as the more standard coconut charcoal found in North America. These coals are hard to find in the US and have only recently been picked up by a few vendors.

A brand of compressed wood charcoal that is the product of Exotic Imports LLC. These coals have a large bar shape that is meant to be broken down to the size you need for your bowl. Newer version have come pre-scored with lines to make the bars easier to snap.

A bamboo charcoal produced by Exotica. Shaped similarly to the original Exotica coals in the form of bars.

Another popular brand in Europe. Made from compressed coconut charcoal these are considered to be high quality. Now being distributed in North America.

A 100% coconut charcoal made with no fillers and using sustainable sources for their coconut shells.

A Starbuzz product. Coconut charcoal with similar price, performance and shape to CocoNaras.

A Starbuzz product, this is a larger coconut charcoal known to have a very long burn time. Claims to burn for at least 2 hours.

An oddly shaped charcoal designed to reduce surface contact between the coal and the foil. This is to improve airflow and reduce the occurrence of charcoal going out on one side. The effectiveness in this regard is questionable. Expensive. Quite large.

Produced by CocoTama and distributed by Hookah John. Claims to be the only coconut charcoal on the market that uses 100% coconut shells without filler and produced by the original makers of CocoNaras. Priced similarly to CocoNaras. 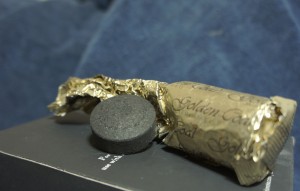 Coated in easily ignited chemicals so that they light very quickly. I have also included silvertab coals in this portion of the list as they claim to be easier to light than purely natural charcoal.

Belgian makes two kinds of coals. A reformed natural that comes in a 40mm disk and a quick light version that comes in 33mm and 40mm sizes.

Three Kings are the most commonly used quick light coals. Disk shaped and available in 33mm and 40mm.

A very fast lighting, disk charcoal best used outside because of how violently they light. Lots of smell when lighting but very clean smoking. A very coarse texture.

A Japanese silvertab style charcoal branded for Socialsmoke.com. As with all silvertab coals you want to let these light fully and to the point where the silver coating is easily coming off.

Golden Coals are disk shaped, quick light coals with a very fine texture. not to be confused with Golden Canary.

Disk charcoal. Widely considered a bad brand that causes headaches and off flavors.

At one time considered to be the best hookah charcoal on the market. Produced in Japan. A silvertab style charcoal.

A Japanese made charcoal in the form of tabbed bars. Considered by some to be second only to Golden Canary.

Comparable to 3 Kings, a disk shaped QL of decent quality.

A brand of disk QLs. Only available in 33mm. Known to burn fast and hot.

An instant version of the popular Chronic Hookah charcoal. Coconut block charcoal coated in flammable chemicals. Easily lit with a pocket lighter. Strong smell when lighting and quite violent in their ignition.