First things first. I want to demystify the notion that people think that just because the front of the box reads “Easy Light”, that it automatically makes this coal “Quick Light”. There’s a BIG difference between “Easy Light” and “Quick Light” coal.

This Al Fakher coal is a natural coal. it is made “Easy Light” because the cube is actually the size of half a cube. I just wanted to try it, so I only ordered a box of 30 pieces. Didn’t want to get anything too big in case that I didn’t like them.

Upon opening the box right after I got it, I noticed that the density of these coals is very, very light. Not at all like some of my favorite coals like Social Smoke which is very heavy. I do believe that the density has a lot to do with the actual size of the coal. They are cube shaped, but it’s about half the size of any cube. Side by side comparison with a full sized coal, you can see that it’s just about half the height ( check out the picture I posted).

The shape is also NOT consistent from one to the other. There are not two coals alike side by side. some of the corners seem cut longer than others, or one side of the cube shorter than the rest of the cube. A little weird, but not a big concern.

Also on some sides it looks very porous with tons of tiny little holes like a strainer, while the other sides are more of a solid flat surface. You can take a look at the pictures I posted to see what I’m talking about. 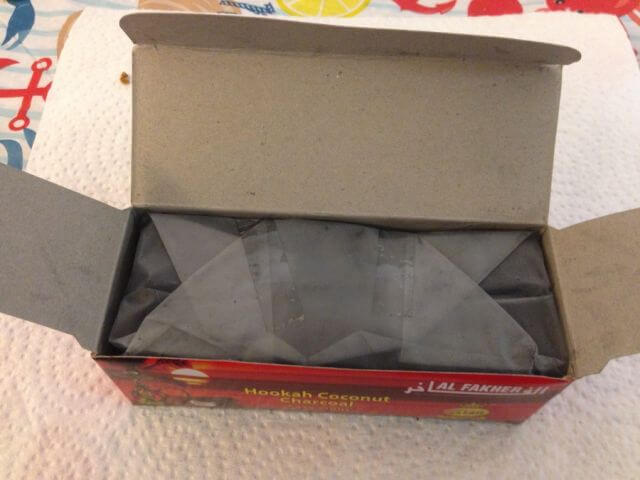 Now it was time to put it to the test. I set up my Social Smoke s with my Hemi bowl loaded with some heat resilient watermelon Nakhla.

The coals are small and light so I wanted to put the “Easy Light” to the test. The way I measure most of my coals is like this: I set up my hookah, put the coals in the burner, and go outside to have a cigarette while the coals light.

These are definitely “Easy Light’ with the total time of full red glow being seven minutes. In comparison, my other coals usually take about 15 minutes to fully light up. so my coals were ready when I got back into the apartment.

Now one thing I do not like about these coals is the smell. No sooner they start to burn that you smell it all throughout the apartment. It smells like wood burning, which is not all that bad I guess, but the smell is strong.

Now I personally don’t really care too much about smell, I’m more concerned about the smell bothering my girlfriend, so I had to turn on the exhaust fan in the kitchen just to be safe. Luckily for me, and maybe extra brownie points for the coals, my girlfriend happened to wake up in the middle of the night for one of her bathroom trips, and she didn’t smell a thing. She did like the smell of the Nakhla watermelon smoke though and that’s always a plus on my side. 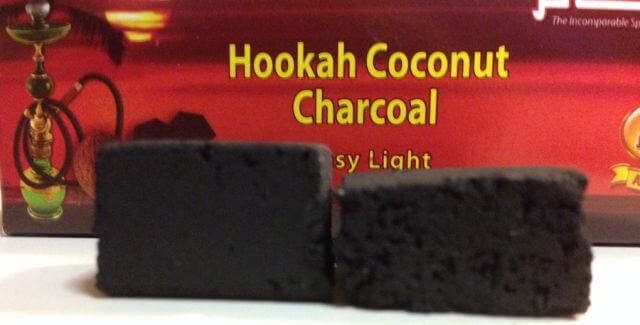 Second thing I noticed is that these coals light up super bright red and don’t ash a lot. I usually grab my coals from the burner and blow on it to get rid of the ash. I did not have to do this with these coals.

Time to put them on the bowl and enjoy some goodness, and I’m thankful it was all goodness. The coals are super hot and maybe I should have started with just two coals instead of three. I figured that since they are half the size of normal coals, that I might need three but it was not necessary. Now it did not burn my shisha and it didn’t make the smoke harsh, but you can tell when you have very hot coals because the wind cover is not necessary.

The session was good, enjoyable, and very tasty. However as hot as the coals were, I only got about 35-40 minutes of flavor before the coals started to die off. 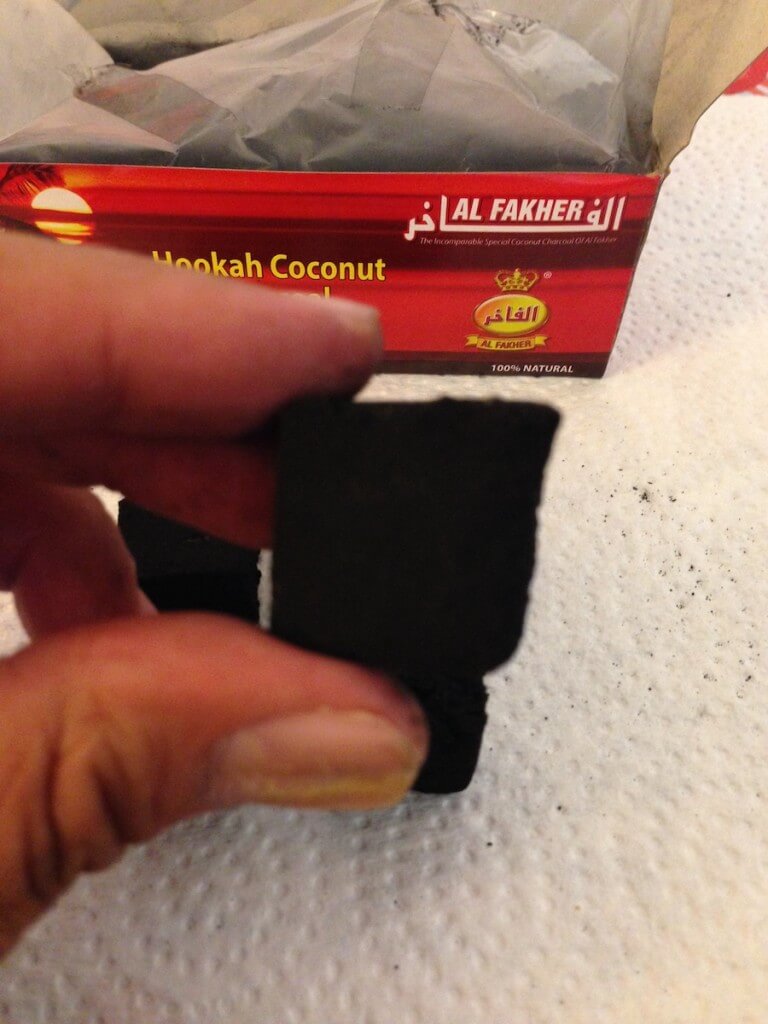 OK, I did get these to try them out, so I started round two. Again only about seven minutes to fully light these bad boys.

Now on the second round I really should have just used only two coals instead of three because I started to notice a bit of harshness and the bowl was already loosing it’s flavor which is not something that happens a lot with normal coals and Nakhla. I usually start to loose flavor around half way through the second round, not at the beginning.
now to be fair, I think is because the coals are super hot and I should have used only two coals like I usually do on round two. So I took the coals off for a minute to let the shisha breath and not burn. I put two coals back on and it was fine for the rest of the session.

With the size of these coals my main concern was that I might have experienced the coals crumbling once they started to get smaller or while I was transferring them with the tongues. However that did not happen which I was happy about.

My second test went much better than the first. Now that I had some knowledge about how these coals handle, I decided to pack my funnel bowl with some Social Smoke Twisted shisha and test the coal with them. Properly using my wind cover I was able to get a longer session out of the heat and was able to enjoy both rounds.

The best part was no headaches and no setting off my carbon monoxide alarm. 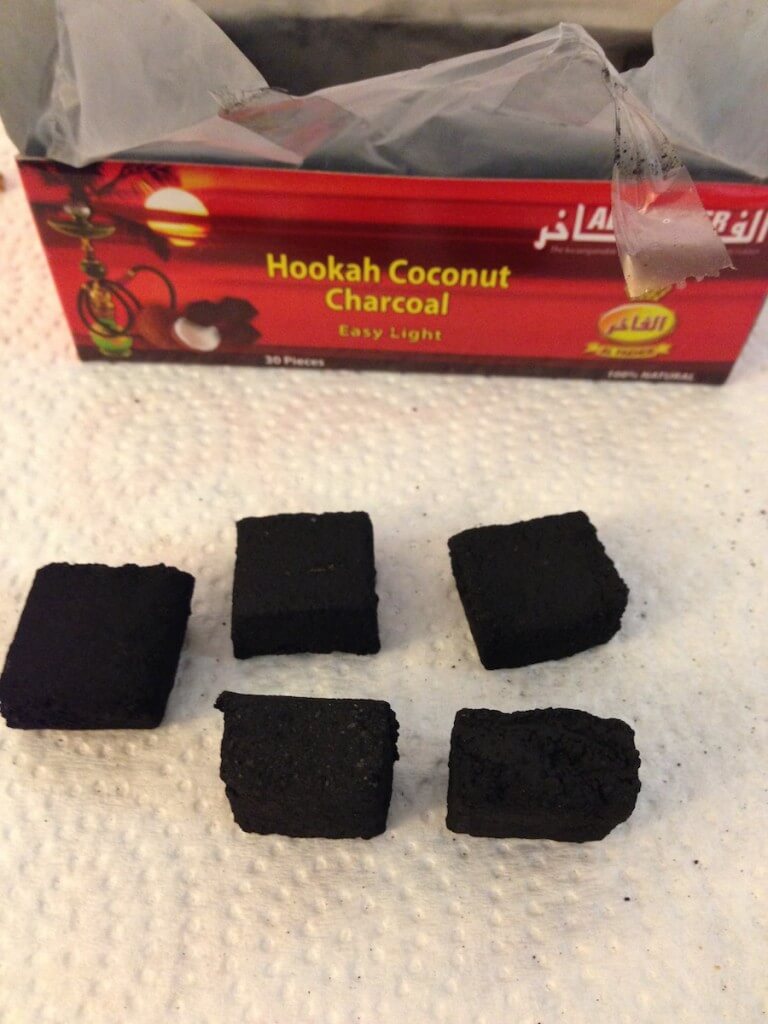 Just like with all hookah sessions, is necessary to be able to know a little about heat management, and I’ve come to learn that each coal needs to be handle differently. For example, coals that burn this hot I use three coals the first round and two coals the second round. Other coals don’t burn as hot so I use three cubes both rounds.

Then of course you have to take into consideration the fact that you might or might not need a wind cover for better heat management.

With these coals I recommend using the wind cover only about half way through the session when the coals are starting to die down. They are so hot in the beginning that you don’t really need the wind cover to get the session started.

I give the Al Fakher coals points for:

I take points away for:

So not only do I recommend this brand of coals, I’m actually ordering a larger box because they are affordable, low maintenance, and get the job done.