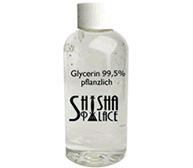 Glycerin is an important part of modern hookah tobacco.  It is a word that many of you have probably heard thrown around from time to time without knowing much about it.  Some people love it and some people hate it.  But what is it really?

Wikipedia defines it as “Glycerol is an organic compound, also called glycerin or glycerine. It is a colorless, odorless, viscous liquid that is widely used in pharmaceutical formulations. Glycerol has three hydrophilic hydroxyl groups that are responsible for its solubility in water and its hygroscopic nature. The glycerol substructure is a central component of many lipids. Glycerol is sweet-tasting and of low toxicity.”

I’ll try and translate this a bit.  Glycerin can be dissolved in water, absorbs water from its surrounding and holds onto it, it’s a fat by definition and is safe for use in foods and other consumables. Glycerin is used in small amounts mixed into a larger amount of water in most applications.  You should also know that there are two major kinds of glycerin.  One is made from animal fats and the other from plant fats.  Yes, plants have fat.

** Thanks to our local supporters from the Young Black Professionals New to Houston on Meetup.com group**

Glycerin performs some simple tasks in hookah tobacco.  Because of its tendency to suck up water it can be used to reduce the chance of the tobacco burning and increase the smoke production.  When it is heated it vaporizes and will make big puffy white clouds of water and glycerin vapor.  This property is utilized in electronic cigarettes and similarly in smoke/fog machines.  Some use glycerin and some use propylene glycol.  For many this is the most important aspect of glycerin in regards to hookah tobacco.  Many modern brands use a lot of glycerin to make a very user friendly tobacco that does not need a lot of special care or technique to smoke properly and to appeal to those obsessed with big clouds.

These tobaccos are often washed leaf (lower nicotine) and are well suited to the new smoker.

Glycerin also has some other interesting properties.  It is a sweetener and can add a sugary flavor to the tobacco.  If too much is used it can make the flavor overly sweet and cloying.  It can also drown out any other flavors and make the tobacco taste dull and uninteresting.  There are a couple brands out there that drown their tobacco in glycerin to the point that all the flavors taste alike.  They taste like sweet nothing and that is why I avoid those brands and won’t post about them.  If used properly this can sweeten the smoke and add a little mouth feel to it as well.

Glycerin is also a preservative because of its hygroscopic properties.  It is often used as a desiccant (meaning that is will dry out things that it comes in contact with) for the purpose of killing bacteria.  It also prevents freezing.  This is not often a problem with hookah tobacco but it’s an interesting fact none the less.

Glycerin is far from necessary in hookah tobacco.  The original forms of hookah tobacco used no glycerin and only utilized molasses or honey as a binder and emulsifier.  These two substances alone will provide a good amount of moisture and will give a good amount of smoke but far less than many hookah smokers are used to present day.  They can be diluted with a little water to increase the smoke but this will reduce the preservative qualities and make it more likely to go bad.  This will also thin out the flavor.  I have had great success in making home made tobacco with just molasses or honey.

A good example of tobacco that does not use much glycerin is Nakhla.  Nakhla is a fairly dry tobacco.  It’s much more moist than some of the really classic stuff but it’s not as wet as brands like Starbuzz.  It smokes perfectly fine and produces some fairly large clouds while maintaining a strong flavor quality and all without swimming in juice.

I hope that this answers some questions about why glycerin is a part of many hookah tobacco blends.  If you have any further questions feel free to post comments here.