What Is Auto-Seal in Hookahs? 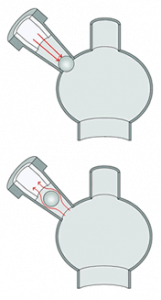 This is a question that I get once in a while and I think it’s a very important one to have answered.

Auto-seal is a feature on many modern hookahs that allows air to be drawn from the hose but does not let air back in. It is only useful on multiple hose hookahs and it can present some problems that I will go over later but it’s a great option.

First I will explain how it works. It’s pretty simple actually. Inside the hose port there will be a small ball bearing most often made out of metal. This bearing sits snugly in the small hole that separates the heart of the hookah from the hose port and is free to move upward. When you draw from the hose the suction pulls the bearing out of the hole and allows the smoke to flow into the hose. There is always a screw or a plate with two holes in it above the bearing to prevent it from being sucked into the hose but still allowing airflow. It’s pretty much the same idea as the purge valve. The ball bearing prevents inward flow but allows outward.

This feature is really only found consistently on modern style hookahs. Traditional hookahs like Magdy Zidan and Khalil Mamoon do not have auto-seal hose ports. As I said earlier it is also only useful on multiple hose hookahs. Having auto-seal means that you don’t need to plug the hose with your finger when someone else wants to draw.

The problems that auto-seal hookahs can have:

All in all I think that auto-seal hookahs are a great option for people that like multiple hoses and smoke with people that don’t remember to plug said hoses when they are not smoking. Even if you are doing something like playing video games that might prevent you from have a free hand this can be great. Personally, I prefer single hose hookahs with traditional construction. My first hookah was auto-seal and I eventually pulled out all of the bearings and drilled out the hose ports to open up the draw. It’s really a matter of preference and what is most convenient for you. Either way it’s good to know what auto-seal hookahs are before you buy a hookah and get something you might not want or need.