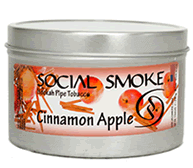 It’s almost Halloween and here in Salem, MA and it’s a fairly big deal.  I am a strong believer in enjoying food, drink and other indulgences that match the season.  That is why I am currently smoking a bowl of Social Smoke Cinnamon Apple.

This flavor is described as apples sprinkled with cinnamon and I would say that is a fairly accurate description.  I love spices and I believe that they pair very well with, what many refer to as, forest fruit.

Social Smoke Cinnamon Apple smells a little bit like a candle in the can.  I have smoked Social Smoke Simply Apple in the past and I got the same scent that is a bit disconcerting.  My experiences with Social Smoke have taught me to not assume that the flavor will follow the smell.

The smoke is good.  I am smoking out of a new bowl that I have never used before so I’m not getting the huge clouds I normally would but the potential is there.  I am using a little less heat than I think this bowl and tobacco combination should use because I am being careful not to over heat it and mess up the flavor.

The flavor is good.  It’s a medium-light flavor with a distinct apple presence and a nice cinnamon note.  I think that the cinnamon could be stronger but I am a huge spice fan so take that with a grain of salt.  The artificial scent does not come over into the flavor much and all in all I think this is a great fall tobacco.

7 out of 10.  I would really love to see more of a cinnamon flavor in Social Smoke Cinnamon Apple but it’s definitely present.  They say that each one is equally represented but i think it tends a little bit more toward the apple.  It’s also a weaker apple flavor than Simply Apple but I think that can be excused.  Both of these flavors at 100% might be a little much for some people.  I like this tobacco and recommend you try it out.